Thank you for visiting our page. 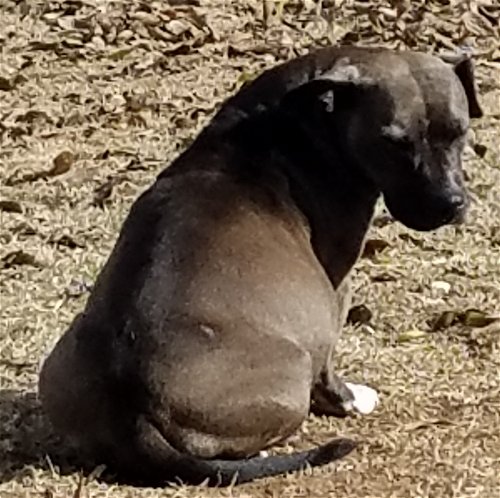 TINKER BELL has had her puppies!  On December 23rd, Tinker gave birth to 9 beautiful healthy puppies.  She has 5 girls and 4 boys, from white to brown to black to spotted to solid.  Their eyes started opening up yesterday.  I'll never be able to see how such a little Pit had so many puppies!   She is feeling much better and gaining strength every day.  With 9 healthy squirming hungry puppies, she eats a lot.  We are feeding her 5 times a day and she isn't leaving anything in her bowl.

Tinker will make somebody a wonderful companion after her puppies are weened.  She is actually small enough she can be a lap dog.  I know most Pits think they are lap dogs but most of them are a bit large for that.  The awful person that threw this little sweetie away like a piece of trash, lost a true treasure.  Tinker deserves the best life has to offer.  If you'd like to be that special person to give her a forever home, send us an email and request an application for adoption.

TINKER BELL is the smallest little Pittie I've ever seen.  She is not available for adoption at this time, but should be available around the middle of February, 2017.  Of course that's assuming everything goes well with the birth of her puppies and her recovery.This incredibly sweet girl is very shy, very quiet, and right now, very miserable.  Her photos don't do her justice.  She is beautifully colored, ranging from a silver-blue, to a tan-brown, and even some black mixed in.  She has some white on her toes and chest.  She has warm brown eyes that just beg for you to pet her.  Her tummy is nearly dragging the ground right now, so she has no desire to move around much.

We believe that Tinker Bell was probably abused as she is terrified when approached, lays down, hides her face, and trimbles until she sees you're not going to hurt her.  It's absolutely heartbreaking to see.  In less than a weeks time, we've gotten her to follow us a bit and she will go into her crate without having to be picked up and put inside.

Tinker Bell has a while to go before she will be eligible for adoption, but she could sure use your donations as she has a long road ahead of her.  We will update her status as we can.

Good with Adults, Leashtrained, Cratetrained, Likes to be in your lap, Obedient, Timid, Affectionate, Eager To Please, Intelligent, Even-tempered, Gentle

Other Pictures of Tinker Bell (click to see larger version):

Email or call for more information about any of our adoptable dogs.